Blog
You are here: Home1 / Blog2 / Professional3 / Relationships4 / Book Review-A Force for Good: The Dalai Lama’s Vision for Our World 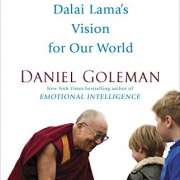 If you start a list of the people who are the most concerned with the welfare of everyone on our planet, names like Mother Theresa, Archbishop Desmond Tutu, and the Dalai Lama are certain to make the list. In A Force for Good: The Dalai Lama’s Vision for Our World, we get a deeper look into what the world might be like if the Dalai Lama got what he believes is best for us.

The vision starts with our responsibility to our fellow humans and to the fragile planet on which we live. Historically, we might have been able to delude ourselves into the belief that we are not all connected to one another. We could believe that our actions didn’t impact others and theirs didn’t impact us. However, in the last century, we’ve conquered travel and communications and made remote destruction all the more possible. We’ve learned about our delicate ecosystems and how changes in one part of the planet have ripple effects everywhere else.

Despite the reality of our world today, we continue to believe that we’re the center of the universe. The sun and universe don’t just revolve around the Earth but around me personally – or so we think. The self-centered, ego-centric view isn’t new or unexpected, but it is harmful. Through self-reflection and developing compassion for our fellow man, we can break the bonds that have us all – to one degree or another – thinking first from ourselves and then to others.

In the Evolution of Cooperation, Robert Axelrod demonstrates how, historically, cooperation tended towards better results. A Force for Good speaks of the research of Kiley Hamlin. Children show an affinity for shapes that “helped” other shapes in a simple movie; even before their second year, they’ll show generosity.

So, while there’s a natural tendency towards self-centeredness, there is a counter-balancing force towards cooperation, collaboration, compassion, and even altruism.

One of my all-time favorite learnings is the idea that anger is disappointment directed. Why is this such a pivotal learning? It’s simple. Anger is a frightening emotion that many have been told isn’t safe or acceptable. (See How Emotions Are Made for some thoughts on the emotion itself.) However, converting anger to disappointment makes it safer. It’s safer to deal with disappointment than anger, because it’s not so burdened by the judgements that others layer upon it.

When teaching conflict resolution, the idea that anger is disappointment directed is always at the core, because it allows people to convert anger into something that they can process. They can assess who they’re disappointed in – whether that’s someone else or themselves. Further, they can evaluate whether the disappointment is realistic or not.

Basically, the transition here is the ability to think through a feeling to understand how it is formed. It’s not that any emotion is bad. It’s only that we gain the ability to contemplate our feelings when we have a framework for taking them apart and examining them.

We are encouraged to review our wisdom and our hidden assumptions; however, as a part of our path towards an integrated self-image (see Rising Strong part 1 and Beyond Boundaries for more on having an integrated self-image), I believe we should also consider examining our emotions to understand them – but not necessarily to change them. I mentioned in my review of The Book of Joy that it’s relatively easy to address perspectives, and this can lead to changing emotions.

In Destructive Emotions, there is a long discussion about the possibility of afflictive (destructive) compassion and non-afflictive (non-destructive) anger. The conversation includes the Dalai Lama saying that anger (translated from khongdro) is, by definition, afflictive. The example given is anger at someone who isn’t listening to you, yelling out to them to stop – because they’re about to harm themselves by walking off a cliff.

I think that here, I believe there are multiple things going on – as the discussion in the book says. I believe that there is a compassion to help the other person, which is good. I think there is then also an anger at yourself for being unable to stop the harm. Let me unpack that a bit. So, there’s a belief that your yelling out to them has the capacity to impact the outcome. You expect that it will. When you fail to be effective, you’re disappointed at your lack of efficacy and therefore angry – at yourself. This anger is then displaced to the other party, because your ego thinks it silly to be angry at yourself when you’re demonstrating compassion. Here, we get to anger through compassion – but not really. We get to anger through the gap between our expectations of our power to change others and the inability to accomplish that.

It is possible that the Dalai Lama is right that there is no anger that is non-afflictive; however, I do believe that sometimes it’s necessary to cause action and provide the energy necessary to make change happen.

In an interesting turn for the religious leader of Tibet, the Dalai Lama seemed unconcerned as to whether others considered Buddhism a religion or a philosophy. “If,” he concluded, “you consider Buddha as a buddha, okay. But if you consider him a philosopher, a teacher, a social theorist, or a scientist—that’s okay too.” In The Book of Joy, the Dalai Lama commends on Gandhi’s response when asked if he was a Hindu: “Yes I am. I am also a Christian, a Muslim, a Buddhist, and a Jew.” The book finishes with, “We were looking for human truth, and we would drink from the cup of wisdom from whatever source it came.”

For me, it’s easier to accept Buddha as a philosopher and a teacher. It’s easier to see him as someone who struggled through his thoughts to find a path that was better than those around him.

The Dalai Lama has some of the best conversations with folks. He gets to have conversations with leading scientists and luminaries who study our inner states through modern technology and time-honored meditative practices. A focus of his has been the development of compassion, both personally and for the entire world.

Compassion and burnout seem miles apart. Compassion is about a desire to alleviate the suffering of others, and burnout is the experience of having been consumed, to be depleted of resources. It intuitively makes no sense that a desire to help others – and, presumably, expend additional effort to reach that goal – could possibly insulate and protect someone from the effects of burnout. Despite this distance and lack of intuitive sense, it appears possible that the very contemplative development of compassion may have some role in protecting individuals from burnout.

There is a degree of trust in the development of compassion. We trust that our fellow human beings are basically good, and that we have the capacity to help them. However, trust is contextual (See Trust => Vulnerability => Intimacy for more.) We trust some people more than others and some situations more than others. Trust takes a long time to develop – and can develop with different loci among different groups (see Trust: Human Nature and the Reconstitution of Social Order for more). One of the catalysts for the generation of trust is transparency.

Ironically, the development of trust is triggered by very little need for it. The more transparent your dealings with others, the less they need to trust you and the more, over time, their trust grows. Think about this from the point of view of compounding interest. If, in your first encounter, you consume only a small portion of the trust that someone is willing to grant you, that trust remains in their bank account for you accruing interest. The less trust you consume, the more is available – and over time, the buildup of trust can be quite large.

This may account for the positive effects seen for long term friends and acquaintances. (See The Deep Water of Affinity Groups for more on this.)

Positive Other, Positive You

An interesting pattern that was offered for dealing with conflict involves a confrontation between Mike Tyson – the boxer – and a philosophy chair. Told to stop by the philosophy chair, Tyson asked if he knew who he was. The response was to acknowledge Tyson’s preeminence in the world of boxing and to then indicate his high status as a philosophy chair. The interaction is interesting because of its ability to diffuse conflict.

I’d venture to say that, having acknowledged the status (and worth) of Tyson, he had little need to prove what was already known – a fight between Tyson and a philosophy chair isn’t a fight, it’s a beating. Instead, Tyson could be curious as to what would make a philosophy chair be willing to put himself in danger. Curiosity, then, could create the space for conversation.

Would you say that we’re living in the most peaceful or most violent times? If you look back into the past and look at the death rate due to human-on-human violence, you find the rate to be somewhere between one in five to one in ten deaths about ten thousand years ago. Today, the death rate seems to be about one in one hundred forty people die by human-on-human violence. So, in the long arc of time, we’re hurting each other less – even if we’ve got better media now to recount all of the human-on-human violence. Even if we account for all the world wars and the conflicts across the world, we’re still better off today than we were ten thousand years ago.

If you reflect upon your life and the forces that you apply to the world around you, do you view them – in summary – as good or bad? Are you leaving the world better than you found it, or worse? If your trajectory isn’t what you want it to be, then perhaps it’s worth taking a look at the Dalai Lama’s vision for our world in A Force for Good.

The role of the infection preventionist is defined by expectations to eliminate healthcare associated infections (HAI), minimize risk, and prevent the spread of COVID-19. These expectations can feel unachievable at times, they may even lead[...]
4:00 pm Investigating Augmented Reality ... @ APIC 2021
Investigating Augmented Reality ... @ APIC 2021
Jun 29 @ 4:00 pm – 5:00 pm

The environmental services team can be the unsung heroes in the fight against infection. Too many environmental services teams are cleaning 50% or less of the high-risk objects. This translates into an increased opportunity for[...]
Jul
19
Mon
2:00 pm Change Management Waterfall and ... @ ATD Webinar
Change Management Waterfall and ... @ ATD Webinar
Jul 19 @ 2:00 pm – 3:00 pm

Everyone in healthcare is experiencing increased demands on their time, resources, and energy; this, combined with systems that are not designed to support the expanding daily work, has resulted in increased rates of burnout. Burnout[...]

The Real Data Type for Dates and Times; and Microsoft Flow’s Perspective

Book Review-An Appeal to the World: The Way to Peace in a Time of Division
Scroll to top
%d bloggers like this: