Blog
You are here: Home / Blog / Professional / The Rise and Fall of the Blog

I started this blog in June 2005. It was after much resistance. Back then every one of the web sites and publishers I was working with was asking if I had one. My first post named the blog – Not fit for print. I really did feel like the entire online world was celebrating the democratization of content and everyone started creating blogs.

More recently I’ve noticed a reduction in the traffic to my blog – not in overall aggregate numbers, those numbers are climbing ever so slowly. However, what I did notice is that my RSS traffic dropped substantially. Take a look at these statistics from 2007 through 2014. (I started using FeedBurner for my RSS feed in 2007.) 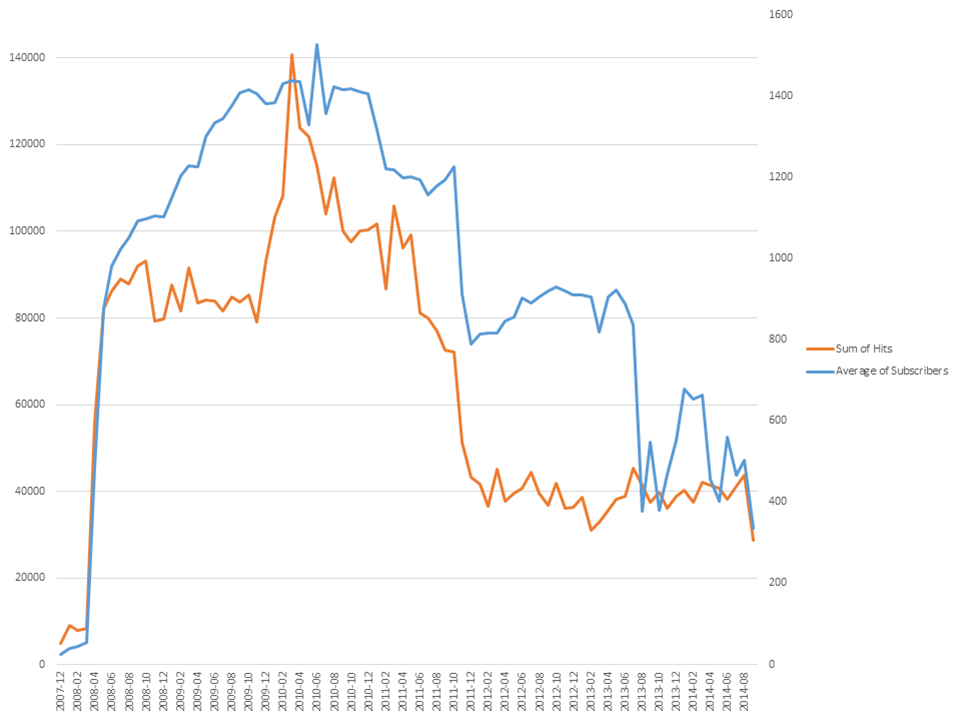 The key to this graphic shows the rise and fall of RSS reading as a way to get information. You’ll see a drop in late 2011 – and another cliff of activity mid-year in 2013. The market used to be getting news through a set of known RSS feeds – feeds of people they knew and wanted to follow. However, over time more and more people began to consume their information driven by search engines and fewer people subscribed to RSS feeds and read them regularly. To see how this is the case, we need to look at how the big producers of content were working.

In 2003 today’s market leader in blog software, WordPress, was started. WordPress holds approximately 44% of the entire content management system market (According to BuiltWith). So when I was looking for statistics for the number of blogs read and those posted and I couldn’t find numbers in aggregate, I decided to use WordPress as a proxy for the overall market. In August 2014 WordPress reported nearly 16 billion visits and nearly 44 million pieces of content. Underlying this data though is a substantial drop in the number of new posts in 2013. 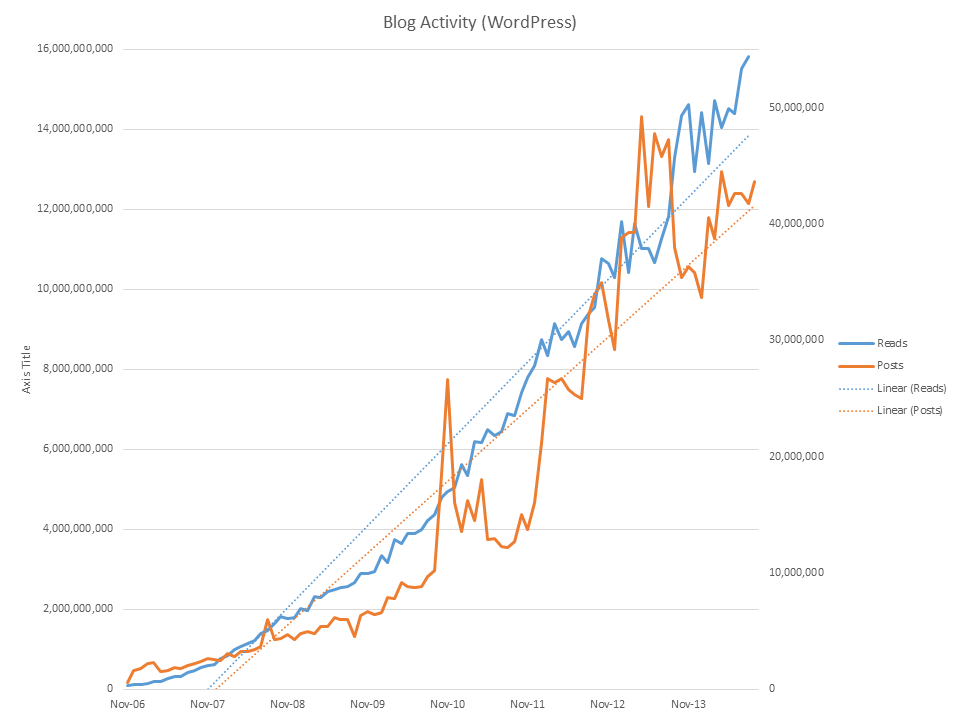 It was only a few months after my first blog post, in October of 2005, when Google created its Reader service. In 2003, FeedDemon, an exceedingly popular Windows based RSS reader was initially created and in 2005 was sold to NewsGator (now Sitrion). Google killed Reader in 2013 citing declining interest. Because FeedDemon used Google Reader on the back end for tracking what you read, FeedDemon has nearly died as well. The death of Google Reader is visible in the above graphics both personally on my blog – but even in the much larger sampling of WordPress sites. While readership subscriptions were already on the decline, Google reader disappearing hastened its demise.

But careful observers will note that blog posts and views on WordPress kept climbing – and were I to show my activity numbers on my blog you’d see a slow climb of activity there as well – but the slope is much shallower. The big change in the statistics is that people are entering through search. They’re no longer following a set of people that they have identified, they’re relying – more and more – on what search brings to them. Instead of selecting what they’re interested in by following people via RSS feeds, they’re searching for topics that they’re interested in – or they’ve stopped proactively looking for content.

You can see in the WordPress numbers that the number of reads are accelerating where the number of posts isn’t accelerating as quickly. (Look how the actual numbers exceed the trend line near the end.) We’re writing less. We’re consuming more. We’re following less and searching more. Blogs started because people wanted to follow others. They were interested in what luminaries for their niches were saying. However, by all accounts that’s not what is happening any longer. People are overwhelmed by following and don’t have the capacity to follow any longer.

In my own experience, I was subscribed to many RSS feeds in the day and I’d periodically check the authors that I was interested in. At first it was every week or two but as I grew busier I found that I was checking less and less. It became monthly and then quarterly. It reminded me of how I used to read magazines. Instead of reading them the moment they came in I’d let them pile up and I’d read them all in one batch – and generally make my head hurt through the process. This was the process I was in when FeedDemon died and I was left without an RSS reader.

Of course, the idea that I didn’t have an RSS reader isn’t literally true since IE and Outlook can both process RSS feeds – however, they’re not very good at the experience and as a result I gave up. I don’t read RSS feeds any longer myself. I can hardly blame others for not doing something that I myself no longer do.

This post was prompted by the fact that I attended a Venture Club of Indiana meeting a few weeks ago where someone was pitching the idea of an organization that connected advertisers with blog authors as a way for them to monetize their blog. It occurred to me instantly that the value of the offering was declining – and probably two years late to market. Perhaps it’s also because I’ve got a pending blog post to write about the book Bowling Alone as well.

I’m going to continue to blog because it’s always been for me as much as it has been for others – and I’ve still got a great number of books to read and review.