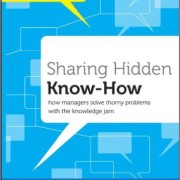 I had the pleasure of working with Kate Pugh on a project for the Ark Group. During our discussions I found her speaking about her thinking about knowledge management and I realized that if I wanted to really understand what she thought about knowledge management the best way to get to know them would be to read her book, so I did. Sharing Hidden Know-How is aimed at solving the problem of how to get knowledge reused. While this may seem like an obvious statement, the differentiation is that the focus is on the actual practical steps that need to be done – the structure – that is necessary for a successful project.

The name given to the process – and to the specific capture event in the middle of the process – is a Knowledge Jam. The idea is that people come together and share their parts of the knowledge process much like musicians coming together for a jam session. Metaphorically speaking this is a great name because it helps people understand that it’s an opportunity to work and interact together in ways that may not otherwise be possible.

Sure you need knowledge that is worthy of sharing and people who are willing to do the sharing but that isn’t enough. You need a way to facilitate the transfer from one person or organization to another. That’s what Sharing Hidden Know-How is about. It’s about getting knowledge from one human or group of humans to another with all of the messiness of language and people in between.

However, three phases of the projects isn’t specific enough to get things done, for that we need to descend into a set of steps that you can walk through to accomplish the work of reusing the knowledge.

From the three pillars come five steps that lead you through the process of selecting, facilitating, capturing, transforming, and reusing knowledge. The steps are: Selecting, Planning, Discover/Capture, Broker, and reuse. We’ll look at each of them in turn.

By not mandating that every project has a “lessons learned” or an after action review but instead prioritizing projects for the opportunity to participate in the Knowledge Jam process. There’s psychology in the idea that it’s a “get to” and not a “have to” thing. The selection process can consider many variables but ultimately consideration should be given to the perceived usefulness – and therefore value – of the knowledge of a team. Also, consideration must be given to how easy – or difficult – it will be to extract the useful knowledge out of the context that it’s currently in. Ultimately, the project sponsor is likely to have a great deal of input of which projects get selected for attention.

Jack Youngblood said that “Luck is a residue of preparation.” The planning process is about planning for success of the event. The Four Disciplines of Execution spoke in detail about how to prepare for meetings – Sharing Hidden Know-How focuses on WHO should participate, WHEN it should occur, and WHERE the Knowledge Jam should occur. There are the standard lists of interested parties like the facilitator for the meeting, the sponsor, and the SMEs. What makes the process interesting is the introduction of Knowledge Brokers – who are tasked with finding useful information for their organization and the champions who are tasked with tactical execution of the meeting.

This is the main event. It’s the meeting that’s used to share the knowledge – and to have the conversations. One key here – in addition to the standard things that you would do in every meeting – is the establishment of ground rules – or expected norms for the conversation. I talked about norms in posts on Primal Leadership, Heroic Leadership, Six Myths of Social Software, and Redirect. Setting a new social norm is important so that people know how to behave. In most organizations the behavior of employees isn’t quite deplorable – but it isn’t great. By setting expectations up front you can establish a protective zone where a new normal is created – something that the authors of Primal Leadership would definitely support.

The actual facilitation uses a shared display either through a projector or TV in a single room or via web conferencing software. In-person face-to-face conversations are definitely preferred because much of the facilitation of the Knowledge Jams is in reading the other people in the room – something that’s hard to do via a web conference – even if there is video.

If you’ve ever wondered where a good gossip could find a role in an organization it’s in the role of a broker. The idea of a broker is that they’re out seeking a “buyer” for the knowledge. Someone who can use it to move their business forward. The brokering step is about matchmaking between what was captured and who might be able to use it. This role bridges the difficult gap between those who have the knowledge and those who need it.

The real goal line as it pertains to the Knowledge Jam is whether the knowledge gets reused. As Sharing Know-How shares that valuing the knowledge reuse is difficult – however, while assigning a specific value to reuse may be difficult, knowing that knowledge management is valuable isn’t a question – it’s the goal.

The real problem is that often the actual reuse doesn’t get recorded so it’s hard to say which Knowledge Jams were successful and which were not. The ideas that were procured through the Knowledge Jam are so transformed by the process it may not be possible to even identify that they originated from the Knowledge Jam when viewed from the outside. Only those who used the knowledge may be aware of where it came from.

“People join companies but they leave managers.” – First Break All the Rules.

In the five steps above we discussed the idea that you create a new norm for the capture event. This normal amount to creating what Sharing Know-How would call a container – but it might also be called a space – or ba. Nonaka a pioneer in knowledge management wrote an article describing “Ba” for the California Management Review in 1998 that spoke of creating spaces. Spaces are not meant in the physical sense but rather they’re meant in the psychological framing sense.

By establishing the ground rules for a meeting you’re establishing space – and the norms that maintain the space. The norms can be as simple as a set of rules for behavior like the rules suggested in Sharing Know-How:

The space may be deeper – driving into the need for trust, vulnerability, and a professional intimacy necessary to share knowledge that was earned through blood, sweat and sometimes tears. (See Trust->Vulnerability->Intimacy for much more about how trust is required for vulnerability which is required for intimacy.) Creating space may also be about explicit conversations about the unacceptability of the dysfunctional behavior that Michael Wilkinson describes:

A space can also be shifting from one mode or model of thinking to another. From the model that Chris Argyris describes as: “Model I behavior is characterized by taking positions, being certain, and using abstract (as opposed to tangible or data-rich) language” to a model that ” takes the focus away from protecting one’s positions or one’s correct status and opens the possibility of unspoken (even forgotten) concepts showing up, combining, and forming something new.”

By defining the expectations – the norms – for behavior inside of the meetings a space is created for people to be safe – and to live out the behavior of those norms.

The panel will share their personal and professional experiences of ‘looking after themselves’ in and through lockdowns. Join the webinar and gain insight and hopefully share approaches that have helped maintain the health and wellbeing[...]
1:50 pm Extinguish Burnout: Practical Gu... @ NACNS 2021
Extinguish Burnout: Practical Gu... @ NACNS 2021
Mar 10 @ 1:50 pm – 2:50 pm

You know that communication is a cornerstone of effective change but did you know that there are proven communications techniques that you and your team can use to improve the responsiveness of the organization to[...]